For years, Ben & Jerry’s took steps to make sure that its ice cream did not contain artificial growth hormone. The company also has a self-imposed feeon its greenhouse gas emissions.

What Ben & Jerry’s did not have was a reliable way of ensuring that the dairy farms supplying it with milk were providing humane conditions for their workers, a major issue in an industry where many people work seven days a week for less than minimum wage.

On Tuesday, the ice cream maker, which is based in Vermont, took a big step toward changing that, signing an agreement with a farmworkers’ group that establishes labor standards for the company’s suppliers in the state, and creates an enforcement strategy that encourages workers to speak up about violations.

“We love to be part of innovation,” said Jostein Solheim, the company’s chief executive. “We believe in worker-led movements, and in bringing in dairy and doing it in Vermont.”

The agreement borrows heavily from an arrangement called the Fair Food Program that was put in place in 2011 to address troubling conditions in Florida’s tomato industry.

In that instance, Subway, Walmart, Whole Foods and other companies committed to paying an extra 1 to 4 cents per pound of tomatoes and to buying only from participating suppliers. The suppliers, in turn, agreed to pay the legal minimum wage and to ensure workers’ rights and safety. The program has been widely credited with improving working conditions in an industry where human trafficking flourished until recently. It has expanded to other crops and other states on the East Coast. 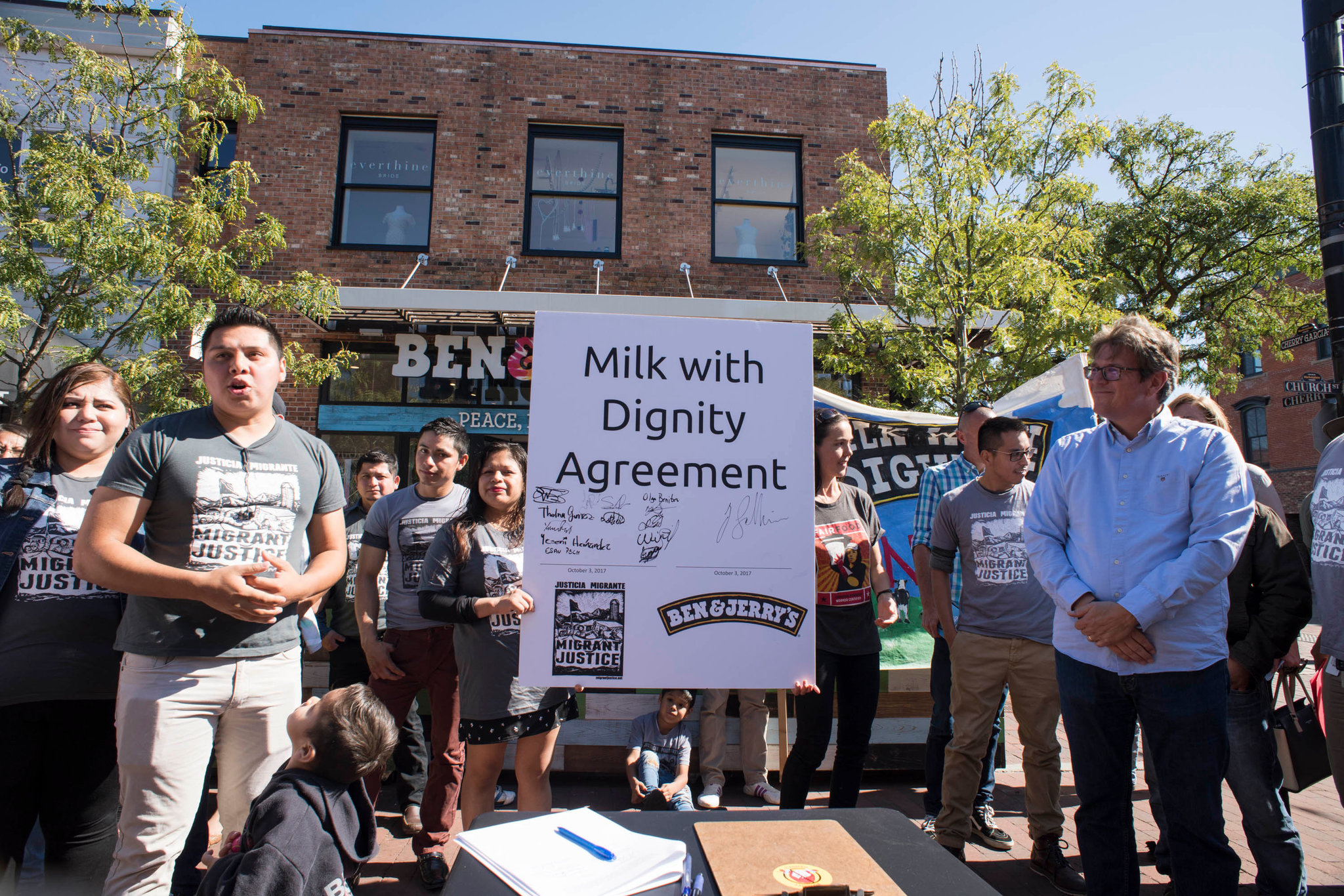 The 1,200 to 1,500 workers in Vermont’s dairy industry have been laboring under their own grim circumstances.

A 2014 survey of about 170 dairy workers in the state by Migrant Justice, the farmworkers’ advocacy group that signed the agreement with Ben & Jerry’s, found that in addition to a scarcity of days off, workers had schedules that frequently kept them from sleeping more than a few hours at a time. Many of the migrants, who typically work year round for low wages and live on the farms that employ them, also had substandard housing.

“One of the biggest issues was housing conditions, the need for workers to be provided with basic amenities, like electricity, water, and housing that is free from pest infestations,” said Enrique Balcazar, a former dairy worker who has helped lead the organizing effort, speaking through a translator.

The workers tend to be undocumented, making it difficult for them to speak out.

Under the program, called Milk With Dignity, workers at dairy farms that supply Ben & Jerry’s will have the right to one day off a week and will earn at least the state minimum wage, currently $10 an hour. Workers will also be guaranteed at least eight consecutive hours of rest between shifts and housing accommodations that include a bed and access to electricity and clean running water.

The agreement requires Ben & Jerry’s to acquire its milk from farms that adhere to the standards. It will be enforced in part by the affected workers, who will be informed of their rights and encouraged to report violations to a 24-hour hotline.

Compliance will be monitored by a group led by a former staff lawyer at the Southern Poverty Law Center’s Immigrant Justice Project, which will conduct audits. Ben & Jerry’s will effectively finance the benefits by paying an undisclosed premium on the milk it buys, based on volume. 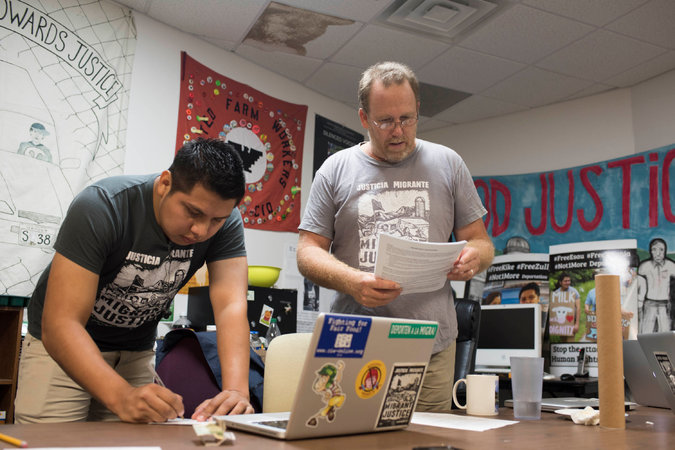 “By signing this agreement, Ben & Jerry’s is prioritizing dairy workers as the most important ingredient in their ice cream,” Mr. O’Neill said.CreditCaleb Kenna for The New York Times

Brendan O’Neill, an organizer with Migrant Justice, praised the company.

“By signing this agreement, Ben & Jerry’s is prioritizing dairy workers as the most important ingredient in their ice cream,” Mr. O’Neill said.

Ben & Jerry’s has been owned by the consumer goods giant Unilever since 2000, but it has retained its founders’ interest in social and environmental activism. The company said it had long had labor standards in place for its suppliers and that the most egregious abuses of workers did not occur on its suppliers’ farms. But it acknowledged that enforcing the standards had been challenging.

“We don’t see a huge gap in hard-core standards,” Mr. Solheim said, “but we see an opportunity to make it work better.”

Migrant Justice began its campaign to improve conditions for immigrant farm workers in Vermont several years ago, not long after a worker died after getting tangled in a piece of machinery and being strangled by his own clothes.

The group’s efforts got a lift in June 2015, when Ben & Jerry’s formally agreed in principle to support the Milk With Dignity program. But negotiating the details of the agreement, which affects nearly 90 farms that typically employ up to 10 workers apiece, proved to be complicated.

“These are real family businesses,” Mr. Solheim said, describing what he saw as a big distinction between the agricultural industries in Vermont and Florida. “It’s a different dynamic than what we have in a big produce area, where hundreds of people show up to harvest.” 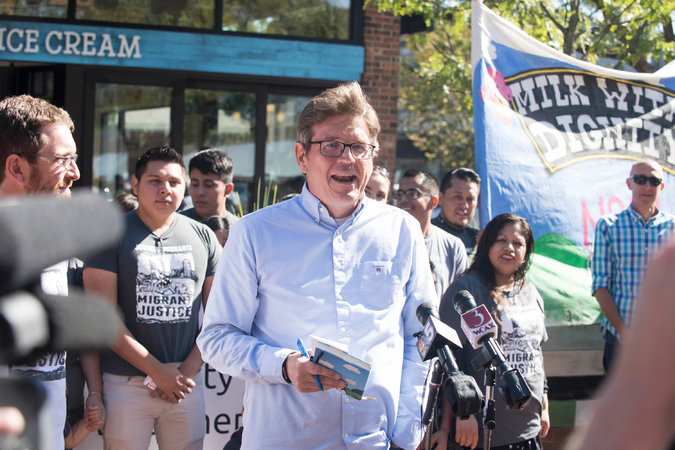 “We believe in worker-led movements, and in bringing in dairy and doing it in Vermont,” he said. CreditCaleb Kenna for The New York Times

Migrant Justice took several actions, including protests and marches, to put pressure on Ben & Jerry’s over the past two years, and the group had scheduled a national day of action for Thursday. (Ben & Jerry’s said it understood the group’s tactics but noted that it had never stopped negotiating.)

The program will be adopted in stages, with some standards, like prohibitions on sexual assault, forced labor and violence toward workers, taking effect immediately. Others, like raising pay to the minimum wage, will come more gradually. Farms must first go through an orientation, and workers must complete education sessions before Ben & Jerry’s begins making the larger payments that will finance some of the benefits.

Some experts, while crediting the Fair Food Program’s achievements, have said they were skeptical about whether the model could be extended to a substantial portion of the country’s farm workers, many of whom experience some of the worst conditions and lowest pay in the American work force. (Estimates for how many farm workers there are in the country run from under one million to a few million. Such workers are not covered by the federal minimum wage law, or by similar laws in most states.)

Greg Asbed, a founder of the Coalition of Immokalee Workers, which pushed for the Florida program, said the agreement involving Ben & Jerry’s — and similar accords in other industries, like those geared toward improving safety conditions for garment workers in Bangladesh — showed that the model could be applied widely.

The only necessary conditions, he said, were the buying power of major brands, which exert enormous leverage over suppliers, and worker participation, to define the needed rights and to help ensure compliance.

Margaret Gray, an associate professor of political science at Adelphi University who has studied farm labor conditions, praised both the Fair Food Program and the Ben & Jerry’s arrangement. But she warned that one force that made such programs effective, the power of corporate giants, could make it hard to extend their reach.